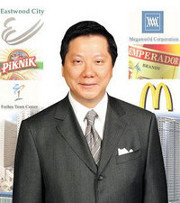 MEGAWORLD CORPORATION was founded by Mr. Andrew Lim Tan he also serves as the President of Richmonde Hotel Group International Limited. Mr. Tan serves as the Chief Executive Officer of Alliance Global Group Inc. He founded Megaworld Corp. in 1989 and has also been its Chief Executive Officer and President since its inception. He serves as Vice Chairman and Treasurer of Golden Arches Development Corporation. He serves as Member of the Management Board at Energy Studies Institute. He served as Chief Executive Officer of Yonghe King Brand and President of yonghe king brand at Jollibee Foods Corp. from June 2007 to August 2012. He served as Principal Executive Officer of Empire East Land Holdings Inc. and President of Megaworld Foundation Inc. He served as Treasurer of Empire East Land Holdings Inc., from July 1994 to May 1998. He has been the Chairman of Megaworld Corp., since 1989. He serves as the Chairman of Emperador Distillers, Inc and Suntrust Properties, Inc. He has been the Chairman of Empire East Land Holdings Inc. since July 1994. He has been the Chairman of Alliance Global Group Inc. since September 2006. He served as Vice Chairman of Alliance Global Group Inc., from August 2003 to September 2006. He has been a Director of Alliance Global Group Inc. since August 2003. He serves as Director of Golden Arches Realty Corporation, Emperador International Limited; Choice Gourmet Banquet, Inc. and Venezia Universal Limited. He serves as Director of Mactan Oceanview Properties & Holdings, Inc.; Megaworld Homes, Inc.; Philippine International Properties, Inc., Yorkshire Holdings, Inc.; Alliance Global Brands, Inc.; Empire East Properties, Inc.; Forbes Town Properties & Holdings, Inc.; Megaworld Foundation, Inc.; Sonoma Premier Land, Inc.; Sherman Oak Holdings, Inc.; and Townsquare Development Inc. Mr. Tan serves as Director of Megaworld Land Inc., Eastwood Cyber One Corporation and Megaworld Globus Asia Inc. He has been a Director of Empire East Land Holdings Inc., since July 1994. He has been a Director of Travellers International Hotel Group, Inc. since 2008. He serves as a Director of Megaworld Cayman Islands, Inc., Megaworld Central Properties, Inc., Megaworld Newport Property Holdings, Inc., Richmonde Hotel Group International Limited, Gilmore Property Marketing Associates Inc., The Andresons Group Inc., Raffles & Co. Inc., Consolidated Distillers of the Far East Inc., Andresons Global Inc. and The Manila Banking Corporation. In recognition of his role in spurring economic and societal development of the City of Taguig through the investments and development projects of Megaworld Corporation in April 2005, conferred on him the Forward Taguig Award in the Field of Business and Entrepreneurship. In 2004, the Quezon City government named him as "Businessman of the Year" in recognition of his "visionary leadership" in transforming Eastwood City into a "magnet for investments" and the "most dynamic growth center in Quezon City". In 2003, he was also named Most Outstanding Alumnus of the University of the East. He is a member of the European and Philippine Chambers of Commerce. Dr. Tan graduated magna cum laude from the University of the East with a Bachelor of Science degree in Business Administration. In 2011, Dr. Tan was conferred by the University of the East the Degree of Doctor of Humanities, honoris causa.

Is your condo investment stagnant? Is your condo unrented ? Does your association dues add up to your monthly expenses?
REGISTER your condo now & we will help you find a renter!
We also do renovation & interior design works to make your condo more valuable that makes the rental rates higher.